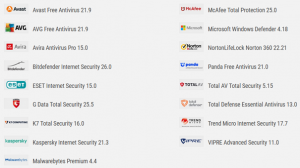 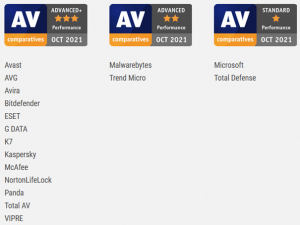 Protection should always be more important than speed. However, there are products that skillfully combine both.”
— Peter Stelzhammer, co-founder AV-Comparatives

The Performance Test looks at the speed impact of each of the tested products in everyday usage situations. These include copying, archiving and unarchiving files, installing and launching applications, downloading files, and browsing websites. AV-Comparatives note that this test does not look at the protection abilities of the products tested; these are covered by the lab’s protection tests, such as the Real-World Protection and Malware-Protection Tests.

The Performance Test was run on a clean Windows 10 21H1 64-Bit system (English), initially with no antivirus software running, and then with the respective consumer security software installed (with default settings). An active Internet connection was provided, to allow for the real-world impact of cloud services/features. The tests were performed on a machine with an Intel Core-i7 CPU, 8GB of RAM and solid-state system drives (SSDs). This machine configuration is defined by AV-Comparatives as “high end”, in contrast to the “low end” system used for their April 2021 Performance Test.

A total of 13 products reached the highest award level, ADVANCED+, in the Performance Test. These were (in alphabetical order):
Avast, AVG, Avira, Bitdefender, ESET, G Data, K7, Kaspersky, McAfee, NortonLifeLock, Panda, Total AV, and VIPRE. These all had a low impact on system performance (speed).

Like all of AV-Comparatives’ public test reports, this Performance Test report can be read or downloaded free of charge, and without registration, from the lab’s website:

AV-Comparatives is an independent AV test lab based in Innsbruck, Austria, and has been publicly testing computer security software since 2004. It is ISO 9001:2015 certified for the scope “Independent Tests of Anti-Virus Software”. It also holds the EICAR certification as a “Trusted IT-Security Testing Lab”.