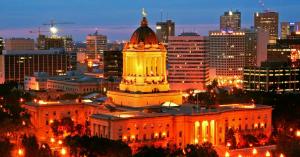 Like so many of the Intelligent Communities of the Year, it is a mid-size city proud of the diversity of its people, its economy and its cultures. There is much to learn from their example.”
— Louis Zacharilla

“Over the past nine years, we have watched Winnipeg evolve in its strategy and the maturity and interconnectedness of its programs,” said co-founder Louis Zacharilla, who led the award ceremony. “Like so many of the Intelligent Communities of the Year, it is a mid-size city proud of the diversity of its people, its economy and its cultures. There is much to learn from their example.”

The 2021 Global Summit was the second virtual ICF Summit, which began on October 26 and concluded with today’s Awards Ceremony. It featured three days of programming, including economic roundtables, master classes and conversations with each of the seven finalists for the award. The other six finalists competing with Winnipeg for Intelligent Community of 2021 were Binh Duong Smart City, Vietnam; Curitiba, Paraná, Brazil; Langley Township, British Columbia, Canada; Mississauga, Ontario, Canada; Moscow, Russia; and Townsville, Queensland, Australia.

MORE ABOUT WINNIPEG
Winnipeg is the capital of the Canadian province of Manitoba, located in the center of the North American continent. Winnipeg’s economy is dominated by agriculture, energy, manufacturing and a growing tech scene. Over the past decade, the city has built a new economic foundation by connecting industry, education and a rising technology sector. Winnipeg’s digital transformation began when local business leaders, frustrated by poor broadband service, established the Manitoba Internet Exchange to attract internet service providers and reduce their operating costs. Today, it has seen major investments in greater connectivity by private sector companies including a $400 million investment by Bell MTS for all-fiber connections across Winnipeg. Strong collaborations with universities, community colleges and major employers have created everything from large fabrication labs to digital equipment upgrades and micro-credential workshops that generate new products, new companies, and new jobs. Innovation centers conduct joint research and development projects with global impact across major industries from agriculture and life sciences to transportation and distribution. Digital inclusion begins with the public library system and continues through valuable community programs that use digital technology to provide economic opportunities for Indigenous communities and foster greater understanding. Balancing tradition and ambition, Winnipeg keeps building a high-potential future for its people. Read more about Winnipeg.

ABOUT THE INTELLIGENT COMMUNITY FORUM
The Intelligent Community Forum (www.intelligentcommunity.org), headquartered in New York, is a global network of over 180 cities, metro regions and counties with a think tank at its heart and a mission to make everyone’s “hometown” at great place. ICF studies and promotes the best practices of the world's Intelligent Communities as they adapt to the new demands and seize the opportunities presented by broadband and digital technology. To help cities and regions build prosperous economies, solve social problems and enrich local cultures, the Intelligent Community Forum conducts research, hosts events around the globe, publishes books, and produces its high-profile annual international awards program. The Forum sponsors research Institutes in North America dedicated to the study of the movement, and national organizations in Canada and Taiwan, both home to many Intelligent Communities. In 2012 ICF was invited to participate at the Nobel Peace Prize conference in Oslo and in 2014, its model and work was recognized by the U.S. Department of Commerce under the Workforce Innovation and Opportunity Act, which, according to the American government, was "aimed at creating a more flexible and responsive system of workforce development to meet the needs of employers looking to fill 21st century jobs.” For more information, go to www.intelligentcommunity.org/icf_membership. For more details on the Intelligent Community Forum’s recent publications and programs, www.intelligentcommunity.org.