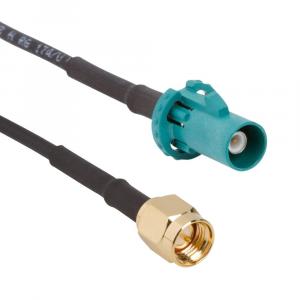 The newly released 50 ohm FAKRA to SMA assemblies utilize the snap-on FAKRA interface on one end and the threaded SMA interface on the other. FAKRA connectors offer a rugged, impact resistant body with mechanically keyed and color-coded housings that meet all automotive industry USCAR-17 standards. The SMA connector allows for easy connect and disconnect along with its compact size which adds to the versatile usage of this assembly from commercial to industrial applications.

FAKRA to SMA cable assemblies are available in a number of standard lengths on flexible RG-58 and RG-174 cables and offer reliable electric performance up to 3 GHz. They are ideal for existing and next generation automotive applications that involve connecting to external antennas including GPS, drones and 360 degree cameras.