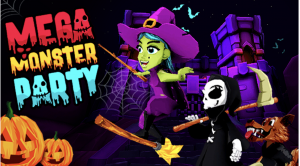 AirConsole’s mission has always been to make games accessible to all. The launch of Mega Monster Party on Steam puts us in a position to compete with the big names of local-multiplayer games.”
— Rafael Morgan, Head of Publishing at AirConsole

ZURICH, SWITZERLAND, October 22, 2021 /EINPresswire.com/ — It's time to get down and celebrate as Mega Monster Party launches today on Steam!

Mega Monster Party is the perfect game for Halloween and is playable locally or online using Steam Remote Play by up to 4 players.

Thrills, chills, and spills await you and your friends (soon to be foes) in 40 different mini-games across 5 boards, each with their own spooky seasonal flavour.

If you're ready to shake off the cobwebs and join in on the fun, you'll be able to find Mega Monster Party today on Steam for $15.99 USD, with a 40% launch discount!

Mega Monster Party is a classic multiplayer board game and mini-game collection by AirConsole, perfect for passing time and ending friendships!
Players use their smartphones as gamepads to control one of eight monstrous characters and conquer the board.

Choose paths wisely, use secret items to gain advantage and stock up on coins by winning PvP mini-games. Once you have the funds, find the Board Master and trade coins for monster minions to get ready for the multiplayer final battle.

Features:
-Board game party fun with a classic spooky Halloween theme.
-5 different boards with their own events and visuals flair.
-40 mini-games to conquer your friends in.
-1-4 player multiplayer either played locally or online with Steam Remote Play

AirConsole is a fast growing Start-Up based in Zurich, Switzerland. Founded by Ex-Googler and serial entrepreneur Andrin von Rechenberg, the company quickly rose to fame by overcoming the previously unsolved challenge of latency when playing games using smartphones as controllers. More than 97,000 developers globally have co-created over 190+ games that have been published on AirConsole, which in return have been consumed by more than 10 million players from 190+ countries. To date, AirConsole’s team has raised 7.4 million USD.