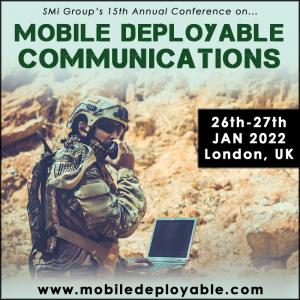 SMi Group reports: Registration and the agenda are now available for the Mobile Deployable Communications Conference in London next January.

LONDON, LONDON, UNITED KINGDOM, September 9, 2021 /EINPresswire.com/ — Moving to London for the first time, the Mobile Deployable Communications Conference, taking place on 27th and 28th January 2022, will have a renewed focus on the UK MoD's strategic communications programme and the UK's tactical communications industry.

Featuring exclusive briefings from worldwide CIS program managers and communications experts, this conference will explore the latest developments in battlefield communications systems and covers key topics in the field, such as battlefield 5G, spectrum management, and cognitive load.

There is an early bird discount of £400 ending on 30th September. Interested parties can register at http://www.mobiledeployable.com/PR1.

The 2022 complimentary event brochure is available at http://www.mobiledeployable.com/PR1.

For sponsorship and exhibition opportunities, please contact Sadia Malick on +44 (0) 20 7827 6748 or smalick@smi-online.co.uk

About SMi Group:
Established in 1993, the SMi Group is a global event-production company that specializes in Business-to-Business Conferences, Workshops, Masterclasses and online Communities. We create and deliver events in the Defence, Security, Energy, Utilities, Finance and Pharmaceutical industries. We pride ourselves on having access to the world's most forward-thinking opinion leaders and visionaries, allowing us to bring our communities together to learn, engage, share and network. More information can be found at http://www.smi-online.co.uk.