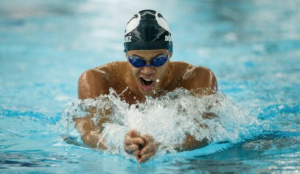 “Josue Dominguez is a talented and committed individual with a passion for helping others succeed – he is the perfect ambassador.”
— David R. Bradford, CEO of FluentWorlds.

PROVO, UT, UNITED STATES, September 1, 2021 /EINPresswire.com/ — FluentWorlds is delighted to announce the signing of world-renowned swimmer, Josue Dominguez, as a new Brand Ambassador. An Olympic swimmer, and student at Brigham Young University (“BYU”), Josue was the only male swimmer from the Dominican Republic to represent his native country in the Tokyo Summer Games.

The Olympic swimmer will be featured in a new integrated campaign for FluentWorlds which will run across print and online channels – rolling out in fall 2021.

“Josue Dominguez is a talented and committed individual with a passion for helping others succeed – he is the perfect ambassador. FluentWorlds admires him for his principles, his talents, and his ability to juggle a demanding swimming career,” said David R. Bradford, CEO of FluentWorlds.

FluentWorlds product heritage lies in creating language learning products that remove the barriers to achieving English fluency, and in other languages. It is the goal of FluentWorlds to elevate the lives of people around the world through remarkable language technologies. “I am super excited to be a part of FluentWorlds’ team,” said Josue.

“FluentWorlds wants everybody to learn English (and other languages) at their own pace to gain the confidence that comes with learning another language, and Josue is the ideal person to help communicate this,” said Dr. Linda Bradford, Founder and Chief Product Officer.

Josue Dominguez is an Olympic swimmer, who has been in the water since he was 4 years old, at the request of his cousin Robert Nunez, who coached him with Academia Deportiva Acuatica in his hometown of Santiago, Dominguez. Prior to the 2016 Olympic Games in Rio de Janeiro, Dominguez was a rising 18-year-old swimming star in his home country. He had already qualified for those Olympics. However, Josue faced another challenge: at 18, he was preparing to serve a mission for The Church of Jesus Christ of Latter-day Saints. Postponing his mission would mean going to Rio — but it could also mean delaying his mission call. Dominguez faced a choice — and he chose his faith, opting out of the Dominican national team for the 2016 Summer Games and opting in to a two-year call in the Mexico Puebla South mission.

Instead of leaping off the blocks with the world’s best swimmers in Rio, he chose to serve a mission for 24 months. “I don’t regret anything,” Josue said. “Everything I learned on a mission, it made an assurance that it was the right decision to make.”

“He wanted to make sure to finish his mission first,” his Coach John Brooks remarked. “Who gives up going to the Olympics to go on a mission? This guy does.”

FluentWorlds’ language learning apps have been downloaded by millions of people around the world. The Company has one of the strongest suite of language learning products, including its Apps- PerfectAccent and FluentWorlds together with a Live Online Tutoring system in 3d Virtual Worlds. Please visit www.fluentworlds.com for the latest information about FluentWorlds and its products.