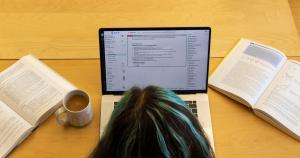 Answer student questions once with Zulip for Education, teach classes with thousands of students

Zulip for Education is a new open source team chat product used at university departments around the world, including MIT & University of California San Diego

SAN FRANCISCO, CA, UNITED STATES, July 26, 2021 /EINPresswire.com/ — SAN FRANCISCO, CA – July 26, 2021 – Zulip, the threaded open source team chat app with the most active open-source community of any team chat software, today announced the release of Zulip for Education. Zulip for Education invites all educators: professors, lecturers, and teachers — to make Zulip the communication hub for their class. Zulip is the only modern team chat app that is designed for both live and asynchronous conversations. Instructors can post lecture notes and announcements, answer students’ questions, and coordinate among teaching staff all in one place.

Zulip supports a wide range of student class sizes, from small to large courses with thousands of students. “Zulip has the best user experience of all the chat apps I’ve tried. With the discussion organized by topic within each stream, Zulip is the only app that makes hundreds of conversations manageable,” says Tobias Lasser, lecturer at the Technical University of Munich Department of Informatics. Zulip works reliably for organizations with thousands of users online at once. The app’s performance will be as snappy as always the night before a final exam or a major project deadline.

Zulip’s unique topic-based threading combines the the best of email and chat to make collaboration productive and delightful. Zulip topics create a separate space for each conversation. Questions and answers are easy to find, so each question is only asked once. You can refer to relevant points by linking to a message or a topic. Instructors can keep discussions orderly by moving or splitting topics when conversations take a turn, and marking the topic ✓ resolved when done.

When Kiran S. Kedlaya, Professor of Mathematics at the University of California San Diego, opened up his graduate-level classes to the world during the pandemic, participants across six continents signed up. “Zulip became a central hub for asynchronous Q&A and posting Zoom links for lectures, whiteboard PDFs, and announcements. Zulip’s topics, and the ability to change the topic of someone else's message, has made it much easier for me to keep things coherent. It’s super easy to discuss technical material using the TeX integration," said Kiran. In addition, Zulip code blocks come with syntax highlighting for over 250 languages, and integrated code playgrounds.

Zulip Cloud is built with privacy and security in mind. For example, email addresses can be hidden, and students don’t have to share when they are online. Students can also mute anyone they'd rather not interact with. Making sure your information stays protected is our highest priority. Our focus on security goes beyond a feature checklist: it’s a point of pride. Zulip founder Tim Abbott was previously the CTO of Ksplice, which provided rebootless Linux kernel security updates for over 100,000 production servers (now the flagship feature of Oracle Linux).

Many modern “open-source” companies offer an intentionally crippled “open-source” version as a demo for their non-open-source paid product. In contrast, Zulip is 100% open source software. Customers that require full control over their data can easily run a self-hosted Zulip installation, which is why thousands of organizations do so today.

Zulip for Education is Zulip’s first market-specific product, serving as a unified platform for announcements, answering students’ questions, course staff coordination, and group collaboration. It is an all-in-one communication hub for your class, replacing solutions cobbled together from email, Slack or Discord, Piazza, and other tools, each of which addresses just a fraction of educators’ needs. Zulip for Education offers a bundle of features that make class communication delightful with flexible administration and moderation.

Zulip Cloud Free is the ideal SaaS offering for a typical class. Large classes and departments can sign up for a Zulip Cloud Standard for Education plan, receiving 85-90% off regular Zulip Cloud Standard pricing. Customers who need to maintain full control of the data can easily set up and run a self-hosted Zulip installation, which comes with all the features of Zulip Cloud.

“Zulip has always had a deep commitment to bringing up the next generation, including mentoring over 100 university interns over the last 5 years through Google Summer of Code, Outreachy, and our own internship programs.” said Founder and CEO Tim Abbott. “Our entire leadership team has a background in teaching and research at MIT, so it has been incredibly meaningful for us to hear from so many people running a class, conference, research group, or community that Zulip was the highlight of their transition to online work during the pandemic.“

To learn more about Zulip for Education, check out our University of California San Diego case study and our Technical University of Munich, Germany case study. Connect with Zulip on social media at @zulip on Twitter and LinkedIn.

About Zulip
Zulip, developed by Kandra Labs, Inc., is uncompromisingly free and open-source software, used by thousands of organizations as a better alternative to Slack, Discord or Microsoft Teams. Zulip is built by a distributed team, with its leadership based on San Francisco, California and over 700 open-source contributors from around the world. Zulip’s threaded conversations help thousands of companies of all sizes, open-source projects and non-profits stay organized, seamlessly melding asynchronous and real-time communication. Current Zulip users include teams from Akamai Technologies, Wikimedia Foundation, Pilot, Cambridge Mobile Telematics, LevelUp, MariaDB Foundation, HL7 International, and more.

Zulip has its roots at MIT, where the original founding team was inspired by the BarnOwl chat client for the Zephyr protocol, and the incredible community that Zephyr supported at MIT. The first Zulip Inc. startup was acquired by Dropbox in early 2014 while the product was still in private beta. In late 2015, Dropbox generously released Zulip as open-source software. In 2016, Tim Abbott, one of the original founders of Zulip, founded Kandra Labs to sustain and grow Zulip’s ongoing development. Kandra Labs is a values-focused company supported by $1M in SBIR grants from the US National Science Foundation.