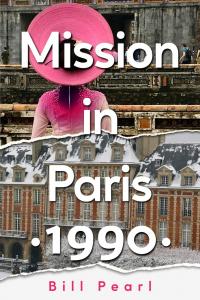 Bill Pearl's "Hearts on Fire, Paris 1968" was a critical hit and now Pearl is set to bring us back to the world of Robert Samberg.

This story glows throughout.”
— Christopher Noël, Acclaimed author of In the Unlikely Event of a Water

PALM BEACH COUNTY, USA, May 13, 2021 /EINPresswire.com/ — Following the success of "Hearts on Fire, Paris 1968", Bill Pearl is back with another scintillating story. In "Mission in Paris 1990," we meet Robert Samberg decades after the events of "Hearts on Fire, Paris 1968." A lot has changed for Samberg, who is now a media tycoon. On the verge of what is supposed to be one of the crowning moments in his career, Samberg rediscovers a long-lost love and his whole world changes in an instant.

The year is 1990. Vietnam and America have not yet made peace. Vietnam is freshly wounded from fighting border wars with China and on the eve of becoming a market economy. The first bombing of the World Trade Center is three years away, so America is not yet awake to the dangers of terrorism. Vietnam and America begin to recognize the importance of ending their differences. Mission in Paris 1990 is the story of how an American media tycoon, Robert Samberg, whose youth in 1968 tied him to Vietnam's future, is recruited to serve his country, never expecting that a mission to explore political reconciliation would lead him to a path of personal reconciliation. On the eve of his greatest business triumph, he rediscovers My Hanh, a long-lost love from Vietnam, and learns they have a son. Robert's life is upended in this tale about the enduring strength of love and the power of forgiveness. This novel, set during the normalization of relations between the U.S. and Vietnam, explores reconciliation among people and nations. It also tells a powerful love story – between a man and a woman as well as between a father and a son.

Mission in Paris 1990 recounts the struggle between a father and a son, the father a media tycoon in broadcasting, the son, a political revolutionary. In their back and forth, the issues of how Americans can view ourselves again with pride despite our imperfections is contrasted with the lockstep approval by citizens in totalitarian regimes where people are not permitted to think differently or speak freely. This novel, set during the normalization of relations between the U.S. and Vietnam, explores reconciliation among people and nations. It offers a powerful lesson – that reconciliation must take place within us if it is ever to take hold between us.

Mission in Paris 1990 is available in paperback and digital formats.

A resident of Florida who travels to France for two months each year, Bill Pearl is an American novelist, poet, former President of Pearl Broadcasting, and former owner of the Florida-based radio station WNGS-FM. Bill holds a master’s degree in international relations with a specialty in diplomatic history. His poetry and prose have been published in Time Magazine, the George Washington University Hatchet, and Paris Voices, Paris, France. Bill’s experiences as a student in Paris inspired "Hearts on Fire, Paris 1968." His experiences in a family business and longstanding interest in Vietnam inspired the sequel, "Mission in Paris 1990."