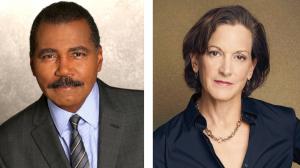 WASHINGTON, DISTRICT OF COLUMBIA, UNITED STATES, April 15, 2021 /EINPresswire.com/ — The International Center for Journalists (ICFJ) will award top honors this year to  Bill Whitaker, a longtime correspondent for CBS News and “60 Minutes,” and Anne Applebaum, staff writer for The Atlantic and a Pulitzer Prize-winning historian. They will be honored at the ICFJ Tribute to Journalists 2021 on November 9.

Whitaker will receive the ICFJ Founders Award for Excellence in Journalism. During a career with CBS News spanning more than four decades, he has produced pieces that range from hard-hitting – and award-winning – investigations to in-depth explorations of complex issues such as criminal justice reform and immigration.

Among his most notable stories was a “60 Minutes”-Washington Post investigation into how the Drug Enforcement Agency’s efforts to curb the opioid epidemic were hampered by a law pushed by drug industry lobbyists. That piece won more awards than any in “60 Minutes” history, including an Emmy and a Peabody.

Applebaum is the winner of ICFJ’s Excellence in International Reporting Award. In her stories for The Atlantic, and previously in her columns for The Washington Post, she has established herself as one of the world’s foremost chroniclers of communist and post-communist Europe. Her newest book, “The Twilight of Democracy,” explains the alarming trend toward authoritarianism and the abandonment of liberal democratic values in countries such as Russia, Hungary and Poland.

Applebaum is also a Senior Fellow at the Johns Hopkins School of Advanced International Studies and the Agora Institute, where she co-directs Arena, a program on disinformation and 21st-century propaganda. Her previous books include the Pulitzer Prize-winning “Gulag: A History,” about the Soviet concentration camp system. In addition to being a Washington Post columnist, she was also a member of the paper’s editorial board.

“These outstanding journalists embody the highest standards of our profession,” said ICFJ President Joyce Barnathan. “Bill has exposed numerous injustices and brought vital international stories home to U.S. audiences – all with a style that is probing and empathetic. Anne has done more than any U.S. journalist to help us understand the history and the future of eastern Europe, which has seen breathtaking progress – and now a dangerous backsliding.”

The ICFJ Tribute to Journalists 2021, which will be virtual this year, will be hosted by CNN Anchor Wolf Blitzer, who has generously served as master of ceremonies since 2012.

At the same event, ICFJ will present the Knight International Journalism Awards, which honor journalists whose pioneering coverage or media innovations have made an impact on the lives of people in their countries or regions. The winners of those awards will be announced in May. They are supported by John S. and James L. Knight Foundation, which funds the ICFJ Knight Fellowships.

To learn more about the event or become a sponsor, go here.