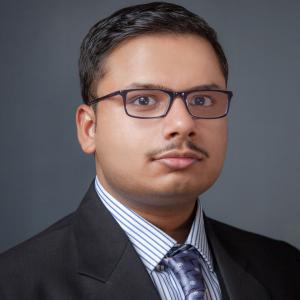 Mr. Nirmalya Thakur winner of The Young Scientist of the Year Award

The Young Innovator Award at UILA 2021 was aimed to recognize an individual not more than 35 years of age, who has made remarkable contributions to advancing innovation in a specific field.”
— Nirmalya Thakur

CINCINNATI, OHIO, UNITED STATES, March 4, 2021 /EINPresswire.com/ — Nirmalya Thakur of the Department of Electrical Engineering and Computer Science at the University of Cincinnati, Ohio, bags the coveted Young Innovator Award in the International Category at the 2nd Universal Innovators Leadership Awards (UILA 2021) for his remarkable contributions to advancing Innovation in Healthcare Research with a specific focus on Ambient Assisted Living in Smart Homes. The awards ceremony, organized by Universal Innovators, took place on February 20, 2021, during the 4th International Conference on Innovative Computing and Communication (ICICC 2021). The event was scheduled to take place in New Delhi, India but went virtual due to COVID-19.

Mr. Thakur was one of the 114 distinguished awardees from 20 different countries at UILA 2021, who were selected as winners of the different award categories from a pool of hundreds of nominees by the panel of judges. The awardees were selected as per the criteria for each award category and in view of their contributions to different disciplines. “The Young Innovator Award at UILA 2021 was aimed to recognize an individual not more than 35 years of age, who has made remarkable contributions to advancing innovation in a specific field through the development of one or more breakthrough technologies, products, or applications.” explains Mr. Thakur.

In his research, this young scientist explores the intersections of Human-Computer Interaction, Artificial Intelligence, Machine Learning, Pattern Recognition, Internet of Things, Data Science, and Natural Language Processing for development of Ambient Assisted Living-based technologies and applications to foster the biological, psychological, behavioral, physical, mental, and emotional wellbeing of elderly people in the future of interconnected living environments, such as Smart Homes and Smart Cities. Ambient Assisted Living, according to Mr. Thakur, “refers to a computing paradigm that involves the use of advancements in information and communication technologies to enhance user abilities and performance through interconnected systems in the living and work environments, that can sense, anticipate, adapt, predict, and respond to human behavior and needs to improve the overall quality of life in such environments.”

Mr. Thakur’s stellar contributions to advancing innovation in this field are evidenced by his publications and involvement in the scientific community in multiple ways as outlined in his brief biography below. His most recent journal paper that has been published in MDPI’s Journal of Information is titled “An Ambient Intelligence-Based Human Behavior Monitoring Framework for Ubiquitous Environments”.

About Nirmalya Thakur
Nirmalya Thakur is associated with the Department of Electrical Engineering and Computer Science at the University of Cincinnati in Ohio, United States. Mr. Thakur's passion for impacting the lives of people and making the world a better place through innovation and discovery has been reflected in his excellence in research. His work explores the intersections of Human-Computer Interaction, Artificial Intelligence, Machine Learning, Pattern Recognition, Internet of Things, Data Science, Natural Language Processing, and their applications. He has authored 28 peer-reviewed publications in a combination of conference papers, journal publications, and invited book chapters that have been cited more than 130 times. He has delivered 21 presentations in the form of keynote addresses and invited presentations at different conferences in United States, Canada, China, France, Denmark, and Indonesia.

Mr. Thakur is a Publons Academy Graduate and by serving as a reviewer for several conferences and journals, he has reviewed around 250 papers. His work as a reviewer was appreciated by the European Alliance for Innovation. He has also worked for 26 conferences as a committee member.

He is a globally celebrated scholar in the field of Human-Computer Interaction and its interrelated disciplines. He has received several national and international awards and recognitions in view of his outstanding contributions to the scientific community. Some of the recent ones include – the Young Scientist of the Year Award, Excellent Researcher Award, induction into the elite list of Marquis Top Scientists of the World, getting Recognized for Excellence in Human-Computer Interaction Research by Marquis Who’s Who, and getting featured by Continental Who’s Who as a Pinnacle Professional in Activity Centric Computing. He was a nominee for the 2021 Forbes 30 under 30 list of Scientists and has received multiple research grants to support his ongoing research at the University of Cincinnati. He serves as a nominated full member of Sigma Xi – The Scientific Research Honor Society, Senior Member of the International Society for Applied Computing (ISAC), and as a Member of the Institute of Electrical and Electronics Engineers (IEEE), Association for Computing Machinery (ACM), Interaction Design Foundation (IDF), Association for Information Systems (AIS), International Association of Computer Science and Information Technology (IACSIT), and the Association of Scientists, Developers and Faculties (ASDF).

For more information about Mr. Nirmalya Thakur, go to https://homepages.uc.edu/~thakurna/

This press release is issued through EmailWire.com – a global newswire with press release distribution services. For more information, go to http://www.emailwire.com/release/1122145-Nirmalya-Thakur-Wins-the-Young-Innovator-Award-at-the-2nd-UILA-2021-.html