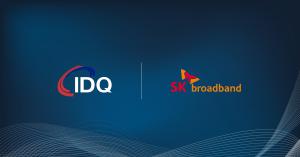 ID Quantique and SK Broadband selected to build a pilot QKD infrastructure in public, medical and industrial sectors in Korea

We are honored to be part of the “Digital New Deal” to build one of the largest quantum communication infrastructure in the world and thus contributing to establishing a highly secure digital economy.”
— Grégoire Ribordy, co-founder and CEO of ID Quantique

GENEVA, SWITZERLAND, September 29, 2020 /EINPresswire.com/ — As part of the “Digital New Deal” projects announced earlier this month, the two companies join forces to deploy QKD and offer a higher level of security for networks in the public and private sectors.

ID Quantique (IDQ), the world leader in Quantum-Safe security solutions and SK Broadband, Korea’s telecom media service provider today announced that they have been selected to build a pilot QKD infrastructure, as part of South Korea’s ambitious New Deal plan which was unveiled on September 3rd. The plan encompasses 10 major projects mostly in the digital and green sectors.

As part of the “digital new deal” initiative which covers artificial intelligence, 5G mobile connectivity as well as quantum technologies and aims at creating future growth engines for the post-Corona era, security of data for the long term was identified as a key topic. Building a pilot quantum key distribution (QKD) infrastructure in Korea is a priority to enhance security in 16 use cases in the public, medical, and industrial sectors. This move by the Korean government is very important to ensure long-term security of critical infrastructure, which are at risk from quantum computing, a technology rapidly progressing towards practical applications (as illustrated for example by a recent advance by the University of Chicago). The government is planning a W58 trillion (42.5 billion euros) project investment for the digital sectors with an expected 0.9M jobs created by 2025.

At ID Quantique, we are dedicated to the success of our customers in all areas. We focus on providing high-performance quantum-safe security solutions for the protection of data in transit. By upgrading existing network encryption products with Quantum Key Distribution (aka quantum cryptography) IDQ ensures that the solutions are “quantum-safe”. Based on the laws of quantum mechanics, QKD enables two parties to produce a shared random secret key known only to them, which can then be used to encrypt and decrypt messages. Our solutions protect sensitive data into and beyond the quantum era when quantum computers, which are being built now, will render most of today’s conventional encryption algorithms vulnerable.

“It is thrilling to lead the Quantum Key Distribution market and industry” says Park Chan-Woong, Head of Infra Division, SK Broadband. “We deploy the world’s top class in Quantum Key Distribution technology, with a current commercial security solution while also preparing for future-use next generation systems. SK Broadband is actively contributing to the development of the QKD ecosystem and will continue pioneering migration towards next generation best-in-class telecommunications.”

Grégoire Ribordy, CEO of ID Quantique said: “Sensitive data is increasingly in danger from the growing threat of cyberattacks and more and more companies and governments are highly concerned by this issue. We are honored to be part of the “Digital New Deal project” with SK Broadband to build one of the largest quantum communication infrastructure in the world and thus contributing to establishing a highly secure digital economy.”