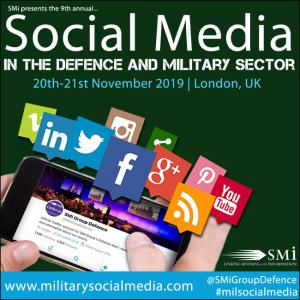 Social Media in the Defence and Military Sector 2019

At the two-day conference, delegates will have answers to questions such as:

• How to win hearts and minds in this new age
• The power of social media during military campaigns with case study examples
• How to effectively engage your audience using AI and Social Media bots
• How to react to live and changing scenarios
• How social media can change the way wars are fought
• If PSYOPS be used in support of Special Operations Forces
• How to deal with trust and misinformation
• How to use social media for recruitment, including using YouTubE

The event will also feature two pre-conference workshops on the 19th November 2019. The first of which will be led expertly by a strategic expert with experience serving in the Irish Armed Forces and now VRAI. Our second workshop will be hosted by the former Head of Communications Services, NATO Headquarters.
Latest registrations include: Norwegian Armed Forces, Canadian Armed Forces, Swedish Civil Contingencies Agency (MSB), Republic of Singapore Air Force, US Air Forces in Europe and Africa Public Affairs, NATO Allied Maritime Command & more.

With over 50 different organisations joining, this unrivalled event gathers a global audience of defence experts at the helm of a digital strategy revolution.

Join the conference at www.militarysocialmedia.com/EIN9

To register for the conference and/or workshops, secure your place at www.militarysocialmedia.com/EIN9

If you would like to showcase your solutions to key decision makers within the industry, contact Sadia Malick on +44 (0) 207 827 6748 or smalick@smi-online.co.uk

—END–
About SMi Group:
Established since 1993, the SMi Group is a global event-production company that specializes in Business-to-Business Conferences, Workshops, Masterclasses and online Communities. We create and deliver events in the Defence, Security, Energy, Utilities, Finance and Pharmaceutical industries. We pride ourselves on having access to the world’s most forward-thinking opinion leaders and visionaries, allowing us to bring our communities together to Learn, Engage, Share and Network. More information can be found at http://www.smi-online.co.uk